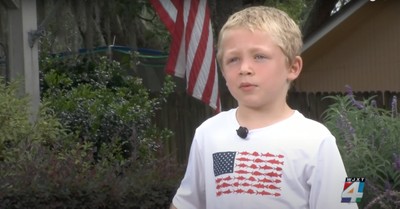 A 7-year-old boy is being hailed as a hero after he swam for an hour to get help after a current swept his dad and 4-year-old sister away.

According to News4Jax, on Friday, Steven Poust brought his two kids, Chase and Abigail, to St. Johns River near Mandarin Point to do a bit of fishing and swimming.

ww.news4jax.com/news/local/2021/05/29/brave-7-year-old-recounts-hour-long-swim-to-shore-after-boating-mishap-on-st-johns-river/”>News4Jax, on Friday, Steven Poust brought his two kids, Chase and Abigail, to St. Johns River near Mandarin Point to do a bit of fishing and swimming.

Poust anchored his boat to fish while his two kids swam next to the vessel.

But soon, a strong current would roll in, forcing Abigail, who was wearing a life jacket, to let go of the boat.

According to The Christian Post, Chase, who was not required by law to wear a life jacket and was therefore not wearing one, told News4Jax that he decided to let go of the boat as well so that he could try to retrieve his sister.

Meanwhile, Poust jumped into the water to try to rescue his children.

“I told them I loved them because I wasn’t sure what’s going to happen,” Poust told News4Jax. “I tried to stick with [Abigail] as long as I could, with both of them, I wore myself out and she drifted away from me.”

The strong current pulled Poust and Abigail further into the river prompting Poust to tell Chase to swim to shore.

Chase reportedly swam and floated on his back for an hour before reaching the shore to get help from a nearby neighbor.

“The current was going the opposite way of going to the boat and the shore, so it was very hard to swim that way,” Chase told News4Jax.

The Jacksonville Fire and Rescue Department, Sheriff’s Office and Florida Fish and Wildlife Conservation Commission responded to the scene to save the family.

By the time Poust and Abigail were rescued, they had been drifting in the water for about two hours and had traveled about a mile away from the boat.

“I screamed for help at the top of my lungs and waved my arms and sure enough, someone heard us,” Poust recalled. “Little man also made it to shore and got help and that’s what saved our lives.”

According to News4Jax, neither Poust nor Chase were required to wear a life jacket because Chase is older than six and their boat was smaller than 26 feet.