What Christians Owe a President 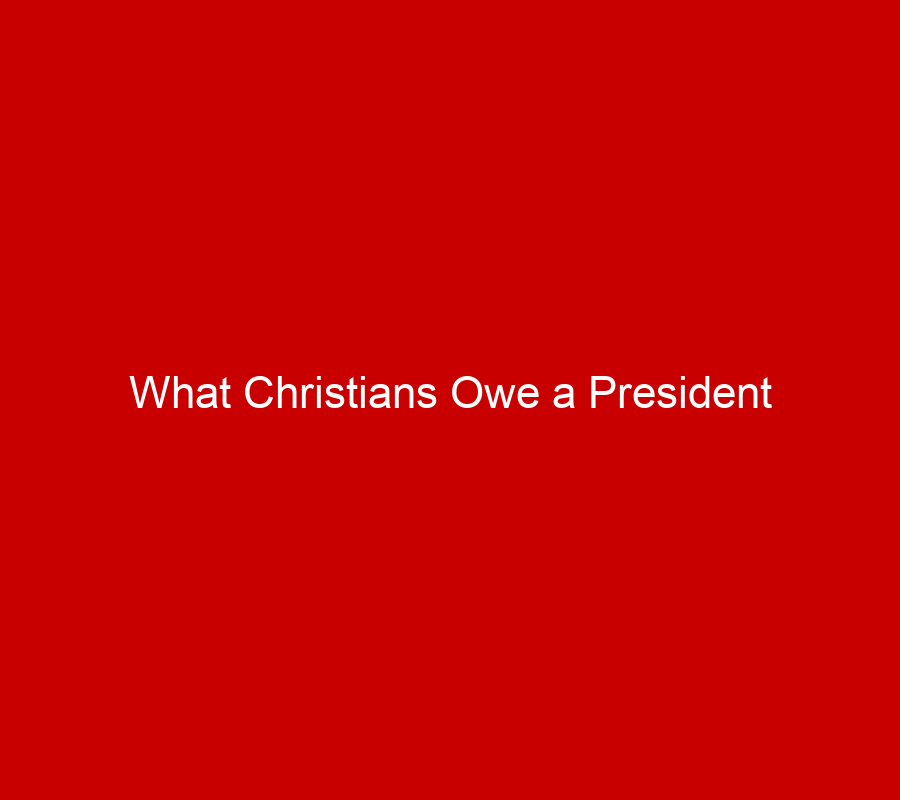 What Christians Owe a President

If you count my incoherent thoughts as a toddler, I’ve lived through the administrations of seven presidents and am now approaching life under the administration of a new one. On January 20th, former Vice-President Joe Biden put his hand on the Bible and took the oath of office to become America’s 46th President.

Times like these are good opportunities to refresh ourselves on a Christian’s responsibility to the government. The people to whom the Bible was written operated under a very different arrangement than we Americans enjoy. Much of the Old Testament was written to God’s people who were either under the oppression of a foreign power or in a God-established theocracy ruled by Judges or a monarchy directed by God. And the New Testament is written largely to people who lived under the thumb of Roman oppression, a people who would see increasing levels of persecution and loss of freedom.

Americans and many who live in Western democracies are privileged to experience pretty strong levels of personal and religious liberty, though encroachments on both are always a constant concern. What’s more, our relationship to the government is different than the people of the Bible in that we have a voice and a vote in shaping who rules over us.

Romans 13, written by Paul to the fledgling Christian community that was increasingly seen as a threat to the Roman Empire, gives us ways to think about our relationship to state power. We are to be subject to “every authority” we are told, for those authorities are ultimately delegated their positions by God. Paul even urges Christians to pay taxes to an empire that was often characterized by corruption, violence, and immoral conduct. Paul could say this because in obeying even these governments demonstrated faith in the sovereignty of God.

This, of course, is not a blanket command. There are many instances in Scripture of civil disobedience, such as the example of the Hebrew midwives in Exodus and Rahab in Joshua. This also doenst preclude us from appealing to governments for our rights to be respected, as Paul himself repeatedly did in the book of Acts. What’s more, Romans 13 is also a warning to those in power that they hold their power only at the discretion of the Almighty. This would be controversial in the 1st century to declare that a higher authority than the Caesar ruled the world. This fits with Jesus’ framing to “give to Caesar what is Caesar’s and to God what is God’s (Mark 12:17).

But how does this apply to life in a representative Republic like ours, where power is shared by the people over whom politicians’ rule? What does Romans 13 look like in a country “Of the people, by the people, and for the people?”

At the very least it seems to mean that Christians cannot really avoid the responsibility of shaping the cities and communities and country in which they live. In a country where people share power, Romans 13 seems to apply not just to the leaders who get elected, but also to the voters who elect them. What’s more, if we are to obey the Great Commandment to “love our neighbors as ourselves (Mark 12:31),” how can we fail to use our influence to shape public policy that shapes the lives of our neighbors?

Christians should, at some level, be involved in politics. And yet not everyone is called to be involved at the same level. There are many who should run for office or should fill the many important jobs in the government at the local and national level. There are others who are thinkers and thought leaders, whose words help shape and inspire. And then the vast majority of Christians should research the issues, vote the best way they know how, but whose calling is to humbly and simply live out the gospel in their communities.

Which bring us back to what we owe a new President. Given that we are to be involved in shaping our governments, how should we approach President Biden? I think there are at least three important approaches for every Christian.

A President will also do things that are good and enact policies that help human flourishing. And those policies we should support. We should support those, because in this country we’ve been given the opportunity to speak out and speak up.

We should take this approach with every President regardless of party.

So what do we owe our new President? We owe him our allegiance to Christ and his kingdom, lived out in faithfulness and integrity.

Daniel Darling is the Senior VP for Communications at National Religious Broadcasters (NRB) and served for six years as VP of Communications for the ERLC. You can find more from Dan at DanielDarling.com.